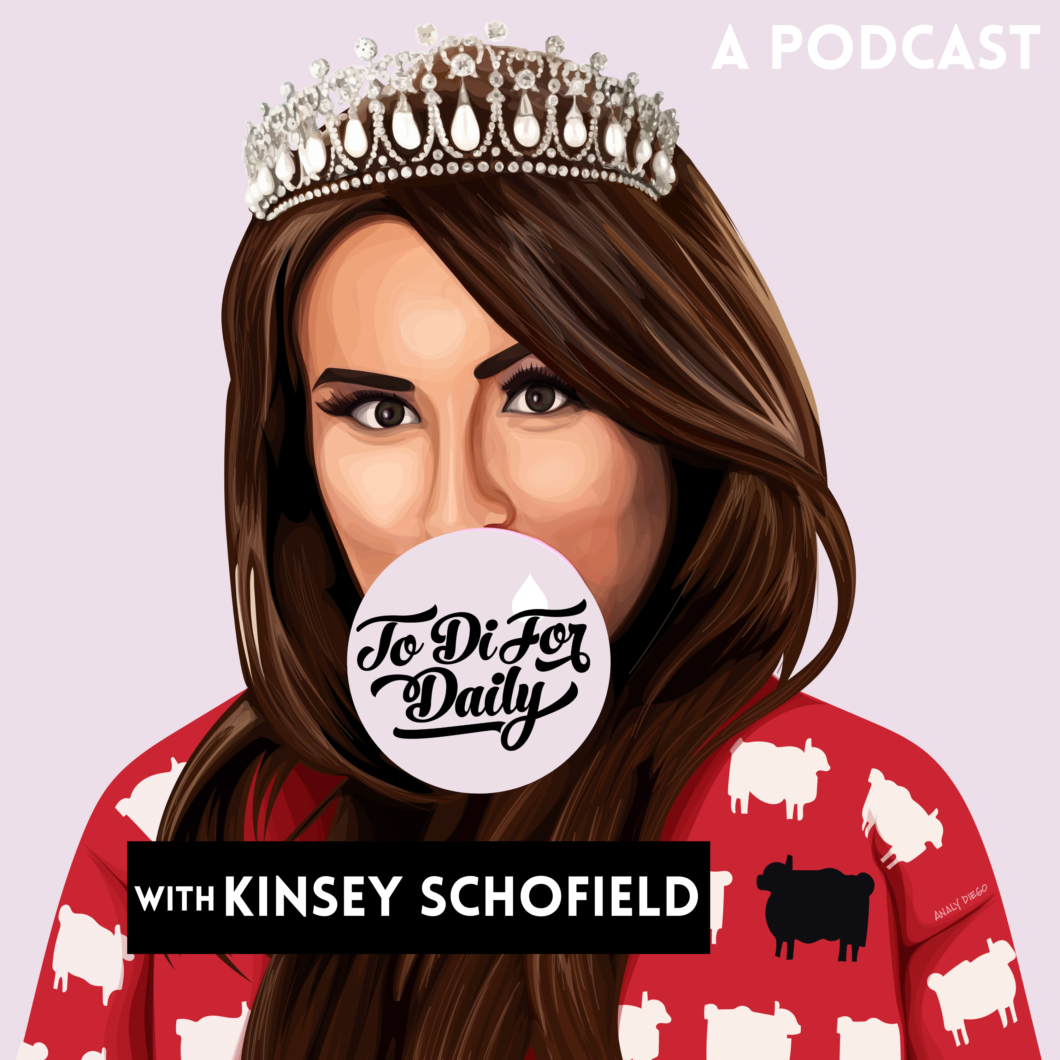 Everyone is talking about the To Di For Daily Podcast

Los Angeles-based royal commentator and the founder of ToDiForDaily.com, Kinsey Schofield, has launched the To Di For Daily podcast: “This has been a terribly turbulent year for the British royal family and all eyes are on the future of the monarchy. I love exploring their history and this podcast gives us the perfect opportunity to delve into it with other royal enthusiasts.”

The first episode spotlights Scandals of the Royal Palaces with author Tom Quinn. Quinn reveals Prince Harry and Meghan Markle‘s expectations for when Prince Charles ascends to the throne. He also tells a funny story about Princess Diana‘s lover getting locked out of Kensington Palace without his pants!

Interviews previously exclusive to ToDiForDaily.com are also now available to stream including conversations with authors Andrew Morton and Christopher Andersen. Both interviews made headlines around the globe as Morton revealed palace fears over Meghan’s popularity. Meanwhile, Andersen predicted – months prior to Queen Elizabeth‘s Jubilee statement – that Camilla, Duchess of Cornwall would be crowned Queen Consort.

The To Di For Daily podcast cover art was designed by famed pop artist, Analy Diego. The cover features a photo of Kinsey Schofield in the Duchess of Cambridge‘s go-to tiara, the Cambridge Lover’s Knot, and Diana’s notorious black sheep sweater.

Expect the podcast to include exciting insight from royal experts and authors. Find quick links to the To Di For Daily podcast at ToDiForDaily.com or wherever you listen to podcasts.

Kinsey Schofield is the founder of ToDiForDaily.com and host of the To Di For Daily podcast. She provides weekly commentary for the UK’s GB News and is a regular on Access Hollywood and Fox News. She is featured in FOX Nation‘s new three-part documentary DIANA: Killing of a Princess – available to stream now. Kinsey Schofield is available for royal commentary.

ToDiForDaily.com is a pop-culture take on the British Royal Family and a celebration of the life of Princess Diana. The royal fansite has been featured on BBC, Access Hollywood, Fox News, AP, CheddarTV, and more. “We believe that Diana’s pretty face matched her pretty heart and our mission is to live every day with our hearts on display like Princess Di.”

To Di For Daily Podcast Episodes

Former Royal Correspondent Michael Cole – ToDiForDaily.com‘s Kinsey Schofield talks to former royal correspondent and PR director for Harrods, Michael Cole. Michael not only followed the royal family all over the world as a royal correspondent for the BBC but he worked for Harrods and with Dodi Fayed’s father, Mohamed Al-Fayed. The seasoned journalist knew Princess Diana for 12 years and knew her stepmother and father for nearly 50 years. He discusses the numerous mysteries surrounding the horrific death of Princess Diana and tearfully recalls what Mohamed Al-Fayed’s wife told him after Princess Diana’s funeral 25 years ago today.

Journalist Mike Parry – ToDiForDaily.com‘s Kinsey Schofield talks to journalist and broadcaster Mike Parry about the 25th anniversary of the death of Princess Diana. Mike Parry was the Executive Editor of the Press Association at the time of Princess Diana’s tragic death in Paris, France on August 31, 1997. After connecting with multiple sources throughout the night and early morning hours, Mike made the gut-wrenching decision to confirm her shocking death to the world.

Royal Author Gyles Brandreth – ToDiForDaily.com‘s Kinsey Schofield talks to author, entrepreneur, podcaster, and tv personality Gyles Brandreth about meeting Princess Diana. Diana absolutely loved his Gyles and George knitwear collection. The princess’s “I’m A Luxury” sweater will go down in history as one of her most celebrated fashion moments. The author of Philip – The Final Portrait also discusses Diana’s relationship with Prince Philip. Philip’s support of Diana and what Prince Philip might think of Prince Harry’s upcoming memoir.

Royal Author Christopher Andersen – ToDiForDaily.com‘s Kinsey Schofield talks to New York Times Bestselling Author Christopher Andersen about his 1998 bestselling book, The Day Diana Died. Christopher had exclusive access to hospital staff at Pitié-Salpêtrière University Hospital – most have not spoken since. He describes in haunting detail the day Princess Diana died and what followed. From Prince Charles nearly fainting upon the sight of Diana to the chaos of trying to dress the princess for her heartbreaking journey back to London.

Legendary Broadcaster Simon McCoy – ToDiForDaily.com‘s Kinsey Schofield talks to legendary broadcaster Simon McCoy about his life as a 90s royal correspondent. He reflects on Princess Diana’s relationship with the media, Prince William’s big heart, and remembers the day that Diana died. The exemplary television presenter also admits what finally made him emotional.

Royal Reporter Cameron Walker – ToDiForDaily.com‘s Kinsey Schofield talks to GB News’ Cameron Walker about being a royal reporter and all things Prince William! From childhood promises shared with Princess Diana to a King William Regency, Cameron and Kinsey honor 40 years of the Duke of Cambridge.

Royal Author Gareth Russell – We met at the Queen’s Platinum Jubilee and now we’re best friends. ToDiForDaily.com‘s Kinsey Schofield talks to author Gareth Russell about their shared Queen’s Platinum Jubilee experience in London. The author of Do Let’s Have Another Drink: The Dry Wit and Fizzy Life of Queen Elizabeth the Queen Mother (available November 2022 here – https://amzn.to/3niTC8i ) dishes on The Crown, Princess Diana’s relationship with the Queen Mother, and a surprising revelation about Prince Charles!

Hollywood Raw’s Dax Holt & Adam Glyn – ToDiForDaily.com‘s Kinsey Schofield talks to the hosts of the Hollywood Raw podcast, Dax Holt and Adam Glyn. Both TMZ veterans and respected entertainment news journalists, the duo discusses what life for Prince Harry and Meghan Markle is like in the United States. The Sussexes appeared at the Lisle Dixon Cup polo event supporting local charities over the weekend. Adam talks about their body language and if the royals need American media to succeed. Meanwhile, Dax throws it back to one of TMZ‘s craziest moments! Receiving photos of Prince Harry naked in Las Vegas!

Royal Commentator Richard Fitzwilliams – ToDiForDaily.com‘s Kinsey Schofield talks to royal commentator Richard Fitzwilliams about Hollywood’s obsession with the royal family. Mr. Fitzwilliams discusses the highs and lows of Netflix’s The Crown series, whether or not they need a disclaimer, and if the royal family should be concerned about seasons 5 and 6. The film critic and royal commentator also explores the similarities between Prince Harry and Robert Pattinson’s Batman!

‘The Palace Papers‘ Review – ToDiForDaily.com‘s Kinsey Schofield discusses Tina Brown‘s new release, ‘The Palace Papers INSIDE THE HOUSE OF WINDSOR – THE TRUTH AND THE TURMOIL.’ How hard was it to dig into Meghan Markle’s past? How bright is Prince Harry and Meghan Markle’s future? The author does not hold back when it comes to mistakes made and unrealistic expectations. Are Prince William and Kate Middleton as squeaky clean as they seem? Brown has an opinion on that too! Plus, where do William and Harry stand today? Just weeks before the Queen’s Platinum Jubilee? This is not the regular format but wanted to jump on and say Hi to our growing audience of royal watchers!

Celebrity Astrologer Emili Adame – ToDiForDaily.com‘s Kinsey Schofield talks to Celebrity Astrologer Emili Adame about Prince William, Kate Middleton, Prince Harry, and Meghan Markle – and what we can learn about them through their zodiac signs. Emili discusses a “challenging” time for the Duke and Duchess of Sussex. She also talks about how the Duke and Duchess of Cambridge rise above negativity and drama.

Royal Author Tom Quinn – ToDiForDaily.com‘s Kinsey Schofield talks to author Tom Quinn about his latest book, Scandals of the Royal Palaces. Tom explains how the royal family previously controlled the media and where they lost that control. He discusses Princess Diana’s unpretentious personality and reveals what Prince Harry and Meghan Markle have planned next.

Royal Author Andrew Morton on Meghan Markle – ToDiForDaily.com‘s Kinsey Schofield talks to author Andrew Morton about his latest book, MEGHAN and the Unmasking of the Monarchy. Andrew explores the extreme similarities between Princess Diana and Meghan Markle. He also notes their differences. The author of Diana: Her True Story brings us new information on Prince Harry and Meghan’s Oprah Winfrey interview and discusses the distinction between popularity and royal rank. Andrew Morton has rereleased his Duchess of Sussex book with new chapters and details.

Royal Author Andrew Morton on Queen Elizabeth and Princess Margaret – ToDiForDaily.com‘s Kinsey Schofield talks to author Andrew Morton about his latest book, Elizabeth & Margaret The Intimate World of the Windsor Sisters. Andrew explains the difficulties of becoming a princess and why Margaret might have really distanced herself from Peter Townsend. We discuss who could play Andrew Morton in Netflix’s The Crown and if he misses Princess Diana. The woman that changed his life forever.