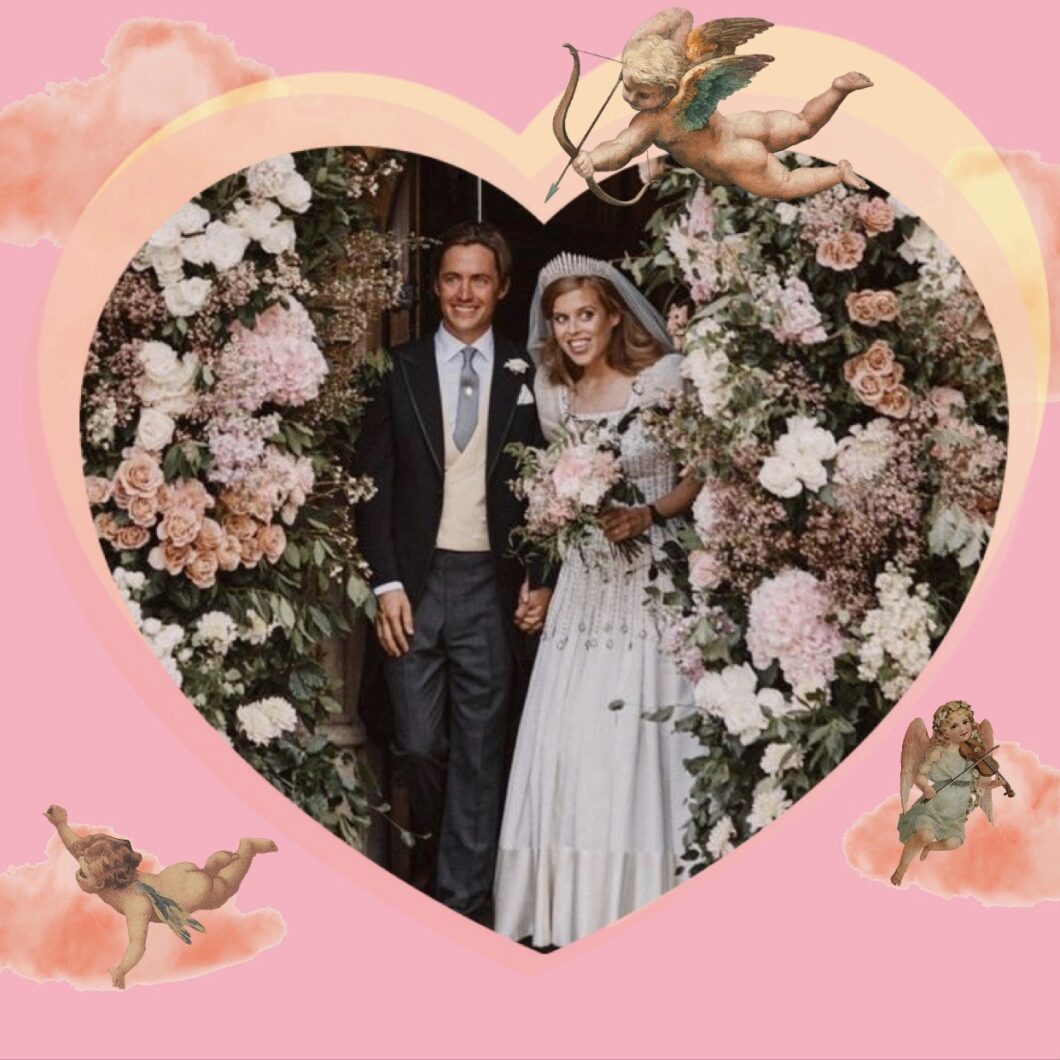 Princess Beatrice secretly tied the knot to the handsome Edoardo Mapelli Mozzi on July 17, 2020 at The Royal Chapel of All Saints at Royal Lodge in Windsor. The theme of the wedding was the secret garden, which was executed brilliantly by the floral garland seen pictured.

Due to COVID-19, the couple could only have 20-30 guests in attendance. Town & Country reports that they kept the list just under 20. Confirmed guests include Princess Eugenie, Jack Brooksbank, the Queen, Prince Philip, and Beatrice’s parents, Prince Andrew and Sarah, Duchess of York. Buckingham Palace sent a press release that read, “The couple decided to hold a small private ceremony with their parents and siblings following the postponement of their wedding in May.”

HRH was walked down the aisle by Prince Andrew and Mr. Mapelli Mozzi’s son “Wolfie” was best man and pageboy.

The Queen allowed Princess Beatrice to wear HER wedding tiara. I’ve read contradicting stories on the history behind this particular head piece. According to RoyaltyRobert of Majesty Magazine, the diamond fringe tiara is also known as the King George III fringe tiara or ‘sunray’ tiara. It was crafted in 1830 (approximately) as a necklace from stones belonging to King George III. RoyaltyRobert says that Queen Victoria was the first person to wear it as a tiara mounted to a thin wire band but Town & Country states that the tiara is referred to as “Queen Mary’s Russian Fringe tiara.” They state that the piece of jewelry was made for Queen Mary, the grandmother of Queen Elizabeth, in 1919. What we do know, factually, is that Queen Elizabeth II and co. broke the tiara on her wedding day in November of 1947… but it was quickly repaired! The same tiara was worn by Princess Beatrice’s Aunt, Princess Anne (the Princess Royal) on her wedding day in November of 1973.

The Queen also lovingly loaned Beatrice a vintage dress from her personal collection. Originally designed by Norman Hartnell, the petite ivory dress is made from Peau De Soie taffeta and is trimmed with ivory Duchess satin. The dress features organza sleeves, diamanté adornments, and a checkered, geometric bodice. As seen on the Queen at the 1962 premiere of Lawrence of Arabia at the Odeon in Leicester Square, Angela Kelly and Stewart Parvin tailored the dress to fit Princess B perfectly.

Thanks to @westminsterabbey‘s Instagram, we learned shortly after the ceremony that, “HRH Princess Beatrice has sent the bouquet she carried at her wedding yesterday to rest on the Grave of the Unknown Warrior – following a tradition begun by The Queen Mother in 1923. The bouquet was brought to the Abbey by the Reverend Paul Wright, Sub-Dean of the Chapel Royal.”

Such a beautiful tradition!