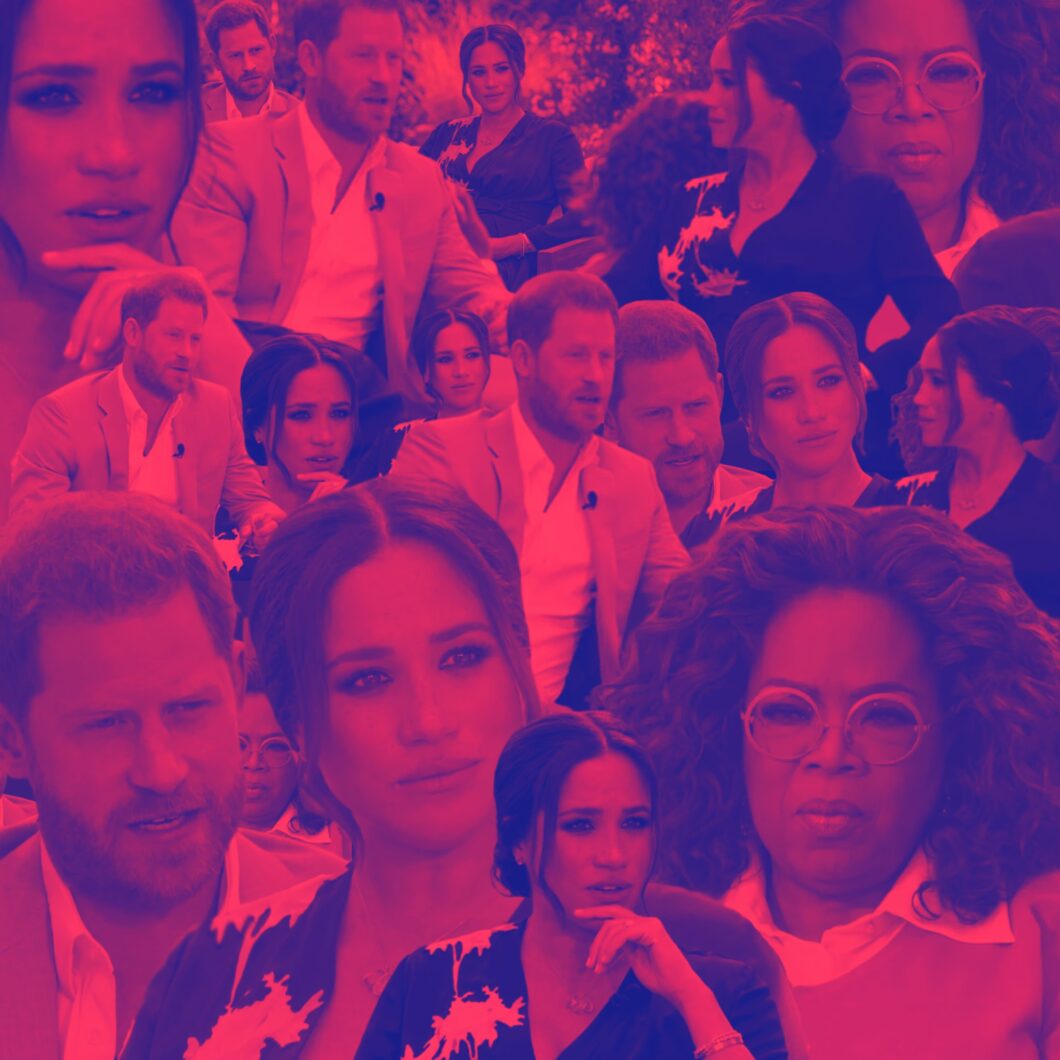 Well, God might truly need to intervene to save the Queen from the hammer that was CBS and Oprah Winfrey‘s sit-down with Prince Harry and Meghan Markle.

As I type this #AbolishTheMonarchy is trending. Obviously more so in America than Europe… who has to wait until tonight to see the scathing special.

It starts with Meghan telling Oprah that she never googled Prince Harry, did not research him, did not know anything about his family. This contradicts a childhood friend’s (who she lost in her first divorce) recollection of a Princess Diana book being on Meghan’s shelf as a teenager. Meghan says that she was surprised to discover that she was expected to curtsy to the Queen upon meeting her in private. She thought that it was just a public display of respect. She describes Prince Harry and Fergie giving her a curtsy crash course outside of Fergie’s estate moments before meeting Harry’s grandmother, HRH. It honestly sounds like a plot to a Hallmark movie. This is a fun and light exchange between Meghan and Oprah. We learn other fun facts like that she married Prince Harry in secret three days before their dreamy Windsor wedding because they wanted a ceremony just for them. At one point she also admits that she found herself stuck in London, without Harry, watching The Little Mermaid… and said she knew what it was like to be a girl who lost her voice when she fell in love… but that girl got her voice back.

Kate takes the first blow. Whether it was intended or not, it seemed important to Markle to clear up a headline… that was also corrected via Finding Freedom… about her making Kate cry days before her wedding. She says that Kate made her cry days before her wedding. Not the other way around. And although she says that the Duchess of Cambridge handled the situation properly… apologized, sent her flowers, etc. she still seemed hurt that Kate or Team Kate did not address the rumor publicly to clear her name.

Now please keep in mind that the same constraints and expectations Meghan talks about dealing with (the suits or “the institution”)… Kate deals with too. But Harry and Meghan don’t hesitate to insist that they are treated differently from the Cambridge family. Why? This is likely due to their distance from the throne.

Meghan’s interview starts to mirror Di’s BBC interview when she delves into mental health. She says she was at her lowest while pregnant. She explains that through Harry she discovered that their baby, Archie, would not be titled or considered a prince… therefore stripping him of proper security. She was clashing with staff, she felt like she couldn’t leave the house and she was heartsick. Then to top it off, she found out that a member of the family was concerned about what the baby’s skin tone might be. Uhm. Yikes. Neither Harry nor Meghan would tell Oprah which member of the family engaged in these conversations but Harry later asked Oprah to reiterate that it was not his Grandmother or his Grandfather.

In regards to media reaction, Meghan’s mental health and the race issue has taken center stage. How does the royal family respond to such an embarrassing claim? Will they even acknowledge it? The very least they could do is investigate and terminate the employees that made their lives more difficult.

At one point Meghan even says that she went to council higher up asking for help with her mental health and was told not to pursue it because it could damage the family’s reputation. Does that person still have a job?

I audibly gasped when Prince Harry reluctantly revealed that when he was struggling with trying to organize (what would be dubbed) Megxit, Prince Charles stopped taking his calls. He told Harry to put his request in writing. Harry also revealed that someone suggested that Meghan keep acting so they wouldn’t have to pay for her clothes anymore… ha, that definitely sounds like Prince Charles.

Both Harry and Meghan argue that there are numerous members of the royal family that make a living off of having real world careers and step-up when they are needed or wanted. That was the situation that they were looking to create for themselves… but Harry said it was his grandmother’s decision to severe all ties. He admitted that this hurt him.

While Oprah asks Meghan if race played a factor in their removal, I wonder if this was always a part of Prince Charles’ plan to scale back the royal family? We’ve heard about it for years. Prince Andrew was angry because he felt like Charles was trying to exclude his girls. (So obviously a pre-Epstein discussion.)

Harry says despite the distance, he’s closer to his grandmother than he’s ever been before… but admits that things are amiss when it comes to Prince William and Prince Charles. He told Oprah that he was determined to resolve their issues and that time heals all wounds… but this interview probably set the Sussexes back on their road to royal redemption.

Meghan even mentions finding out from staff that Prince Philip was in the hospital a few weeks ago. Why wouldn’t Prince William text his brother letting him know? Kind of weird, right? If I’m not telling my brothers someone else’s business… why am I even here?

Oprah’s interview did introduce Prince Harry and Meghan Markle to their new neighbors. An American audience… who are incredibly sympathetic towards them. Their story is out there now, they’ve corrected the narrative. I think it’s in their best interest to distance themselves from here on out and show the world who they are and what they can do outside of the claustrophobic environment that they fled.

I wish them the best of luck.