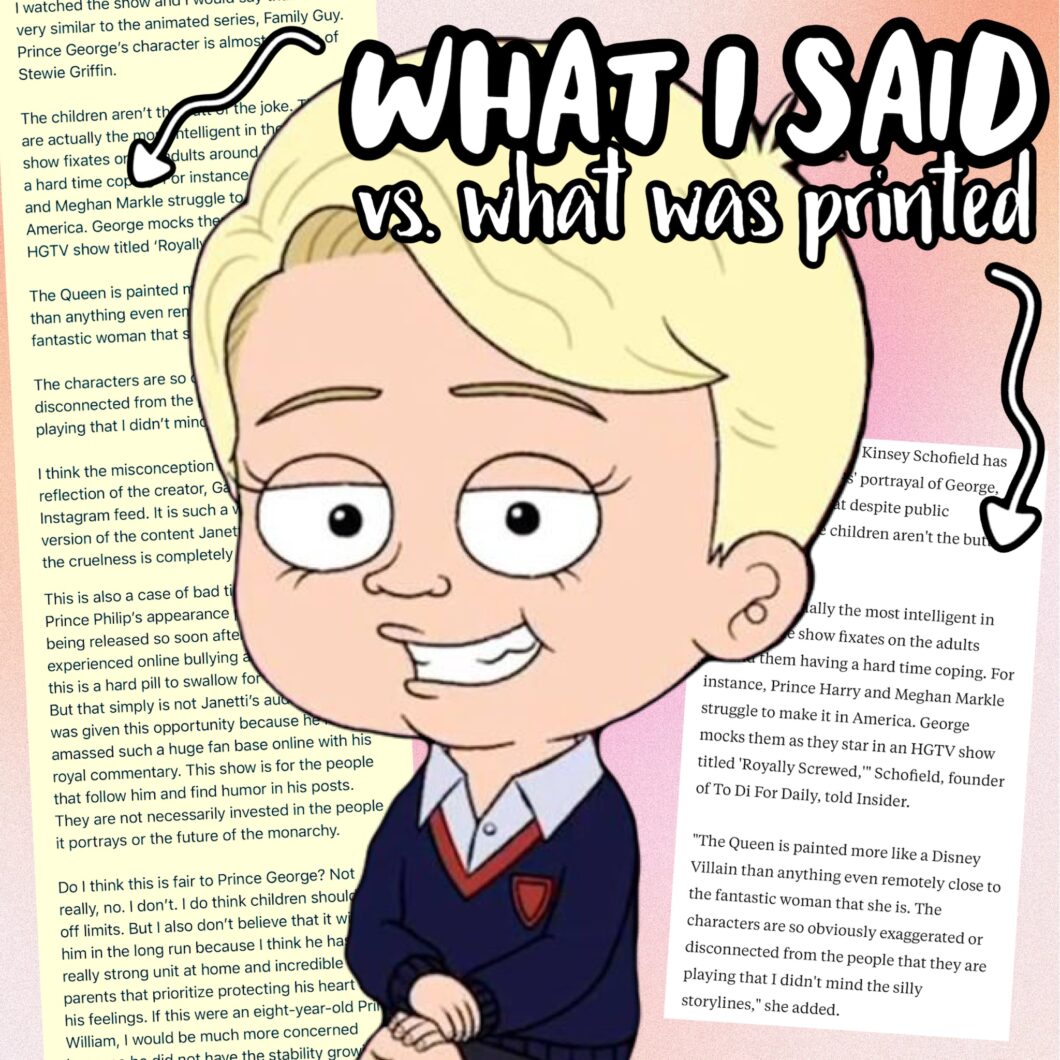 I am always grateful when someone asks me for my opinion on the royals but occasionally, my words bite me in the butt… when they really shouldn’t. I understand that journalists have to cut down interviews but sometimes they cut down an interview so much that it changes the meaning of your words.

Here is my full reaction to HBO Max’s new series, The Prince.

I watched the show and I would say that it is very similar to the animated series, Family Guy. Prince George’s character is almost a clone of Stewie Griffin.

The children aren’t the butt of the joke. They are actually the most intelligent in the mix. The show fixates on the adults around them having a hard time coping. For instance, Prince Harry and Meghan Markle struggle to make it in America. George mocks them as they star in an HGTV show titled ‘Royally Screwed.’

The Queen is painted more like a Disney Villain than anything even remotely close to the fantastic woman that she is.

The characters are so obviously exaggerated or disconnected from the people that they are playing that I didn’t mind the silly storylines.

I think the misconception is that this show is a reflection of the creator, Gary Janetti’s, Instagram feed. It is such a watered-down version of the content Janetti used to share and the cruelness is completely removed.

This is also a case of bad timing. Between Prince Philip’s appearance post-death and it being released so soon after Prince George experienced online bullying at the Euro Finals, this is a hard pill to swallow for royal watchers. But that simply is not Janetti’s audience. He was given this opportunity because he had amassed such a huge fan base online with his royal commentary. This show is for the people that follow him and find humor in his posts. They are not necessarily invested in the people it portrays or the future of the monarchy.

Do I think this is fair to Prince George? Not really, no. I don’t. I do think children should be off-limits. But I also don’t believe that it will hurt him in the long run because I think he has a really strong unit at home and incredible parents that prioritize protecting his heart and his feelings. If this were an eight-year-old Prince William, I would be much more concerned because he did not have the stability growing up that George has.

I would not describe that as defending the series’ portrayal of George and by stating that that is what I did, it puts me in a position to defend myself online to angry strangers. This stuff happens all the time but in this case, it made me sincerely disappointed because I love the Cambridge family and am especially fond of Prince George.

I would never want to see his feelings hurt.

If you’ve taken the time to read this, I appreciate you.