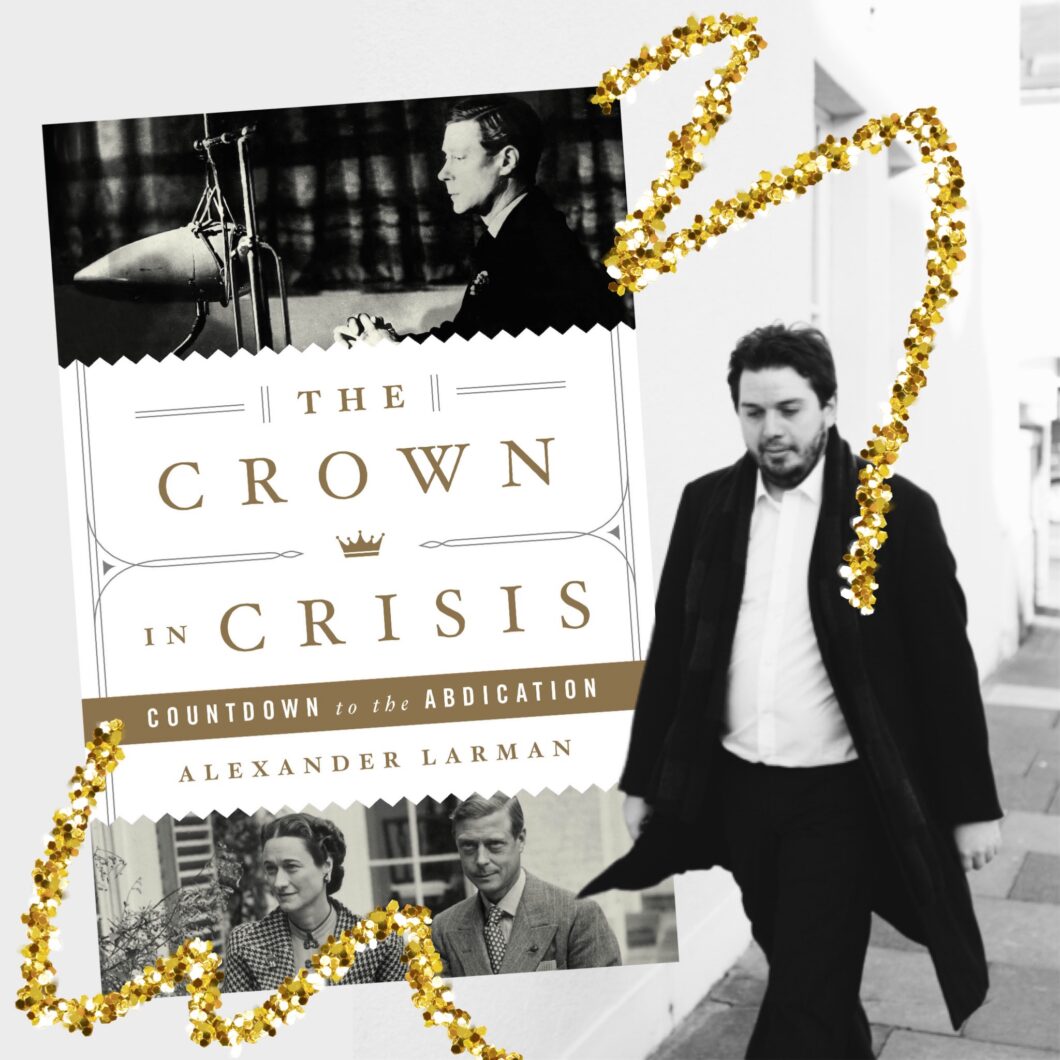 They say that the best books pluck you from your current location and transform you to a completely different time and place. You’re lost in their world and you can’t think of anything but this new environment that has been perfectly painted for you. That is how I’ve felt while navigating The Crown in Crisis: Countdown to the Abdication by Alexander Larman. Like a fly on the wall during one of the most scandalous and ghastly periods in the royal family’s history.

Larman has a great sense of humor that you uncover throughout 352 pages of newly discovered materials. As a historian and author, he was given access to comb through articles, letters, and documents at Windsor Castle. I loved learning some of the authentic reactions to the Simpson scandal from politicians, family members, and even residents at a senior living facility! Whispers seemed to only fuel the King’s stubborn heart though.

The Crown in Crisis: Countdown to the Abdication is such a fun explanation of how the dominos fell for Wallis and Edward. If you enjoyed Netflix’s The Crown, this is a historically accurate description of those events. PS. I couldn’t finish my hard copy fast enough so I purchased the Audible version. The narrator is absolutely fantastic! His name is Richard Trinder and he’s an actor featured in Harry Potter movies… obviously.

I love The Crown in Crisis and I think you will too.

Kinsey Schofield: Edward really fought for Wallis. Really, really fought for her. I can’t decide if it’s because he was madly in love with her and this was his person or if he never thought the job was as important as it is. Do you think Edward just loathed his lineage or was this a case of true love?

Alexander Larman: I think Edward was always instinctively unhappy being the Prince of Wales, knowing that he would one day be king. He had no particular interest in the idea of ‘royalty’; he liked being bowed and curtseyed to, enjoyed the money and the prestige that the role gave him – he was obsessed by money throughout his life – and very much valued the ability that his status gave him to impress women, but he had no respect for the wider, sacred aspects of monarchy. Also, all his previous relationships before Wallis had been unfulfilling ones, so she was the first person to complete him. As she wrote in her memoir – I think accurately – ‘I was the first to penetrate the depths of his inner loneliness’. So I think that his love for her outweighed his contempt for his royal responsibilities, but it was a close-run thing. It would have helped if she’d loved him, too…

KS: The monarchy had such control over the media around the time of Wallis’ divorce from Ernest that it protected their brand and allowed them to quietly strategize. At what point did the media realize it was in their best interest to cease the ceasefire and to monetize these repeated scandals?

AL: At a time when we’re exposed to 24-hour breaking news, social media and the constant NOISE of information, it’s quite interesting to go back to 1936 and see a time where the print media were all-powerful, led by Lord Beaverbrook, who had direct access to the king and Buckingham Palace. What he said, went, and he thought it was best to keep quiet and not allow his (or other) papers to print the juicy facts. But there was a lot of grumbling and tension about the media not being allowed to print the stories about Wallis, a lot of letters being sent saying ‘We’re going to break this story soon whether you like it or not’, and so when the dam finally broke in early December 1936, it was as if a great intake of breath had finally been exhaled. I imagine that a lot of papers – more than usual – were sold that month.

KS: In your opinion… did the royal family ever get that kind of control back? It seems like it all went to hell with Diana Princess of Wales and has never been reined in.

AL: The Royal Family isn’t called ‘the Firm’ for nothing. In an ideal world, all of its members would be quiet, dutiful and get on with the job, and attract public adulation. Looking back over the past, present and future, George VI was pretty much ideal from that perspective – he wasn’t a perfect king but he was about as good a monarch as the country needed in wartime and could have imagined after his brother abdicated. Elizabeth II has been the exemplar of duty and diligence, partly because she’s never offered any controversial or newsworthy public statements, and has saved the monarchy from danger over and over again. But Diana threw a metaphorical hand grenade into the Firm by completely going against protocol and not doing what she was told. And then you have, in different ways, Charles, Andrew and, of course, Harry and Meghan, none of whom have done what they’ve been ‘supposed’ to do. So I think that the idea of ‘control’ has well and truly vanished. Perhaps it’ll come back with William and Kate…she, especially, is by far the most PR-trained member of the Firm that there’s been in decades. Clearly marrying someone who isn’t an aristocrat is a good idea!

KS: There is a saying that you are who you associate with and Wallis and Edward kept some pretty questionable company… did they understand that their associations were wrong or were they blissfully ignorant and lazy?

AL: I think that hanging around with a mixture of Nazis, playboys and the morally questionable was never going to be a great idea. But Edward and Wallis wanted novelty, variety and fun, which could be supplied far better by the people who the writer Osbert Sitwell called ‘the gay, courageous, pirate crew’ than it could by more respectable and suitable company. I don’t think that they saw anything wrong with who they consorted with, but then Edward, especially, believed that, as king, he could do what he liked, and if someone was good enough to drink with him, they were therefore beyond criticism. Especially if they flattered him, like the Nazi-sympathising socialite Emerald Cunard, who called him ‘Majesty Divine’.

KS: There are certain points throughout the book where you explain unique slang based on the period… like Reno’d. (Which meant getting divorced because everyone in the US was getting divorced in Reno, NV.) What are some of your favorite slang terms from that period? I thought that was fascinating.

AL: I always like the upper-class British slang of the period – there’s a great moment when Churchill’s being condemned in the Houses of Parliament as ‘twister’, which is nothing to do with tornadoes or lively games of physical skill, but instead meant a swindler, or dishonest person.

KS: You joke about Madonna‘s movie based on Wallis and Edward, W.E. I hate myself for loving it. When did you see the movie and what were your first impressions coming from a historian’s perspective?

AL: You are forgiven, Kinsey. I first saw the film in 2012, and thought it was an unsuccessful attempt by Madonna to a period drama like Tom Ford’s A Single Man, and forgot about it. I watched it again while I was researching my book in 2019, and felt quite differently about it. It isn’t good, by any definition of the term. The modern-day plot doesn’t work and feels like it’s been grafted on, the dialogue’s awful and I disagreed with most of the conclusions about Edward and Wallis’s relationship. But it’s got a weird sort of earnestness to it that makes it oddly fascinating. I imagine that Madonna’s therapist, especially, would get a lot out of it. Does she see herself as a modern-day Wallis, and does that make Guy Ritchie Edward VIII? There’s probably more to unpack there than in the film, to be honest.

KS: I have so much to think about now! …I’m jealous of your access to some of the archives at Windsor Castle. What is that experience like? Do you have someone there with you? Are you wearing gloves? What does the room smell like? Does it feel like magic?

AL: It was an enormous honor and privilege – a really enormous deal. Probably about 10% of the text of the book comes directly from all of the letters, diaries and journals that I had access to. What happens is that you apply to the archives for access, and if it’s granted, you turn up in Windsor and you’re given an all-access pass for the day. Then you head through the Castle, up to the famous Round Tower, and you climb an enormously steep flight of stairs. (I should say that there’s security every ten yards who check your pass.) Once you’re in – and it’s proper medieval stuff, all thick heavy stone walls – then you check in everything in a cozy little tearoom in a locker apart from your laptop or paper and pencil (no pens, mobile phones, etc allowed), before you’re shown into the archive room, which is a small, book-lined room, that overlooks the Castle and the town of Windsor. Usually there’ll be two or three historians working in there at any given time, and a friendly member of staff will have put together all the material that you’ve asked for. You then have a few hours to look through it, and to take as many notes as you can, before it’s time to go home. Everyone has a different experience. Some people go back day after day for weeks, others try and cram in as much as they can into a day. I was more of the latter kind – I only went twice in the end – but something that was frustrating/exciting was glimpsing all sorts of brilliant material just outside of the scope of The Crown in Crisis and thinking ‘Oh, this would be great in a sequel’. To anticipate another question, watch this space…

KS: Did you come away from this book liking Wallis and Edward? Did you ever feel sorry for them?

AL: I wouldn’t say I ‘liked’ either of them especially. I felt very sorry for Wallis, who I think was tough, pragmatic, very much enjoyed the good things in life and knew that she had to work for them, and ultimately tried and failed to stop Edward from taking the ultimate step. She’s had a bad rap from history, and I don’t think that she ever tried to impress anyone more than she absolutely needed to, but she deserves a reappraisal. As for him oh dear me. Lots of reviews in the UK cited my description of him as ‘a wretched, quixotic ruler, an obsessed and demanding lover and, bar the odd instance of compassion and decency, a selfish and thoughtless man’ as being damning. To which I can only say ‘have you seen what happened since?’ But then, I did also shed a few tears when I was in the Royal Archives and I was reading all the farewell letters that Edward received on the day of his abdication, which are incredibly moving when read one after the other. Even if you allow for formality and protocol, there is still a genuine sense of loss, which makes you realise that some people – rightly or wrongly – really did care about Edward. Question is, would they have done so if he’d been plain old Eddie Windsor? Probably not.

KS: Mr. Larman, thank you so much for your time and the opportunity to speak to you. I very much love this book.

AL: Thank you, Kinsey, so much for your support. It’s been a pleasure to answer these questions.

Grab your copy of The Crown in Crisis: Countdown to the Abdication now!