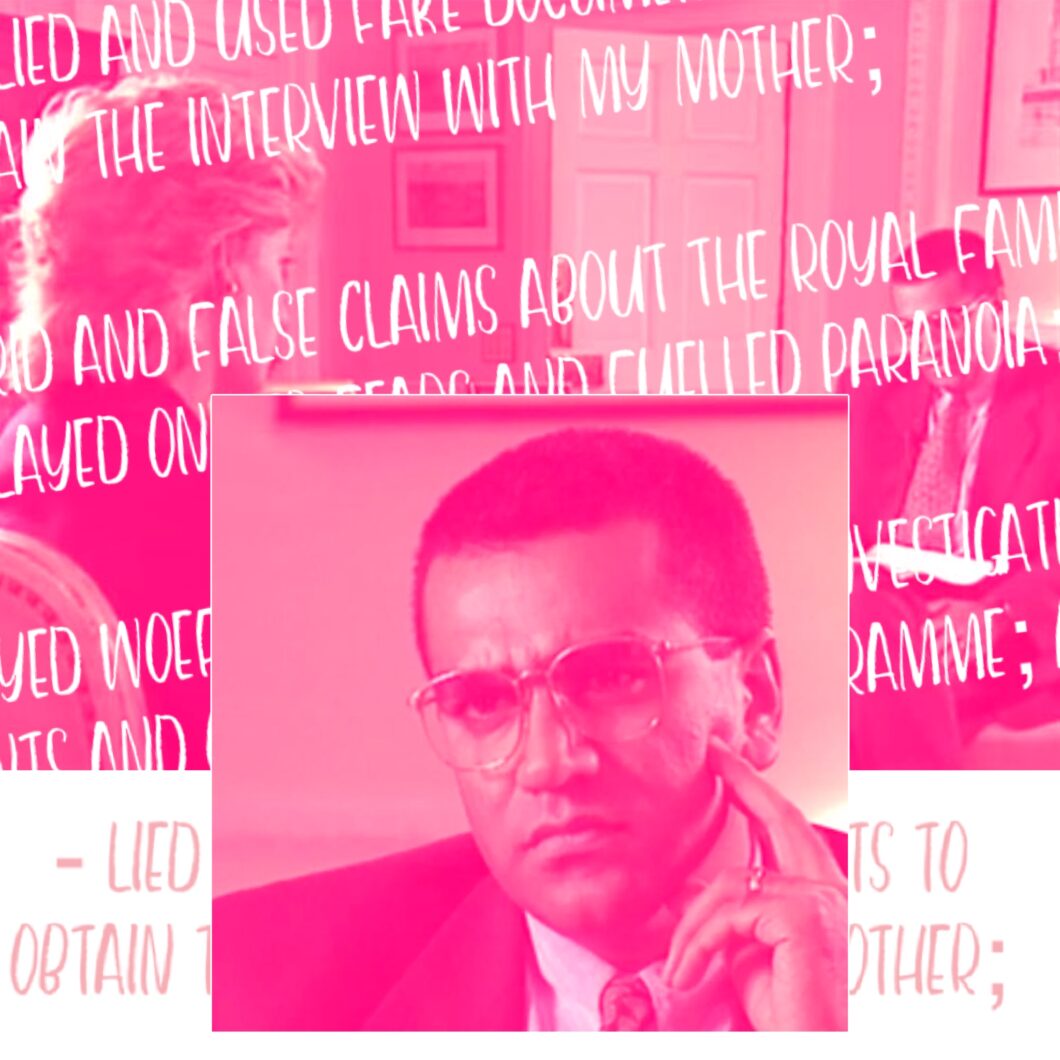 Let me just start out by saying that we will not be linking to or sharing Princess Diana‘s BBC Panorama interview ever again to honor Prince William‘s request today.

The conversation started thanks to ITV‘s bombshell documentary that claims that false documents were presented to Princess Diana and her brother to convince her to pursue her nightmare Panorama interview. Diana, The Truth Behind the Interview goes behind the scenes of the 1995 secret sit-down that was seen by 23 million people.

During the interview, Princess Diana questions Prince Charles’ ability to properly reign as king. This resulted in the princess being formally rejected by the royal family and stripped of her title. Not to mention the complete blow out she had with Prince William over the humiliation of her exposing her affair with James Hewitt. It was also said to be the first time Princess Margaret sided with Prince Charles.

BBC initially responded to the accusations admitting that the documents presented to Princess Diana were forged but said reporter Martin Bashir has been too sick with COVID-19 to respond. Days ago photographers caught a photo of Bashir getting take out.

A former BBC chairman, Michael Grade, recently told press that the allegations are “a very, very serious matter,” and “there is a very dark cloud hanging over BBC journalism.”

Over the last six months, Charles Spencer (9th Earl Spencer) has put the heat on BBC to investigate the tactics that they pursued to secure the secret interview with his vulnerable sister.

Journalist Jonny Dymond says the notes Earl Spencer says he made with Bashir two months before the interview are “astonishing.”

Bashir allegedly claimed that Princess Diana’s private correspondence were being opened, her car tracked, her phone tapped, her bodyguard was plotting against her, and close friends were leaking stories to the press.

If you’ve read Butler Paul Burrell‘s book A Royal Duty – originally published in 2001 – you know that these were all serious concerns of Princess Diana.

In November, Earl Spencer tweeted, “Many people are, quite understandably, asking why I’ve waited till now to come forward with the truth about how the BBC Panorama [interview] with my sister came about. While I knew that Martin Bashir used fake bank statements and other dishonesty to get my sister to do the interview, what I only found out 2 weeks ago, thanks to journalist Andy Webb’s persistent use of the Freedom of Information Act, is that the BBC also knew. Not only knew about it, but that they covered it up.”

“If it were not for me seeing these [fake] statements, I would not have introduced Bashir to my sister,” Spencer said in a letter to the BBC.

These extraordinary revelations have come to light in 2020 thanks to Andy Webb. He is the writer and director of Diana, The Truth Behind the Interview. Mr. Webb originally requested documents pertaining to the Panorama interview back in 2007. He was granted access to the documents 13 years later… 48 HOURS before his documentary aired.

BUT… Webb was not the first one to break this story! Nick Fielding and Jason Lewis of The Mail on Sunday originally broke this story in April of 1996! “It was unduly and unjustly denied that recognition at the time,” Fielding told Press Gazette.

Also speaking out is graphic designer Matt Wiessler, who says that he was instructed to create the documents by Bashir and was “made the scapegoat” in a 1996 BBC inquiry into the interview. He says his career never recovered.

In response, the BBC announced that it was ordering a fresh inquiry in November… “The BBC is taking this very seriously and we want to get to the truth,” said a spokesperson. “We are in the process of commissioning a robust and independent investigation.”

Now thanks to Lord Dyson, hopefully Earl Spencer, his sisters, and Princes William and Harry can have some closure.

According to Lord Dyson and his team’s investigation, the BBC fell short of “high standards of integrity and transparency” in relation to Martin Bashir’s 1995 interview with the Princess. The report calls Bashir’s actions “deceitful” and explains that the BBC‘s own internal inquiry in 1996 was “woefully ineffective.”

The BBC responded with apologies to Princes William and Harry, Princess Diana’s ex-husband, Prince Charles, and brother, Earl Spencer. While Bashir admits that faking the documents was “stupid” he also insists that they were not associated with Diana’s decision to follow through with the interview.

Here is are some highlights from Lord Dyson’s report:

Prince William responded with a very stern video posted to social media, “I would like to thank Lord Dyson and his team for the report. It is welcome that the BBC accepts Lord Dyson’s findings in full – which are extremely concerning – that BBC employees:

He continued, “It is my view that the deceitful way the interview was obtained substantially influenced what my mother said. The interview was a major contribution to making my parents’ relationship worse and has since hurt countless others. It brings indescribable sadness to know that the BBC’s failures contributed significantly to her fear, paranoia, and isolation that I remember from those final years with her. But what saddens me most, is that if the BBC had properly investigated the complaints and concerns first raised in 1995, my mother would have known that she had been deceived. She was failed not just by a rogue reporter, but by leaders at the BBC who looked the other way rather than asking the tough questions. It is my firm view that this Panorama program holds no legitimacy and should never be aired again. It effectively established a false narrative which, for over a quarter of a century, has been commercialized by the BBC and others. This settled narrative now needs to be addressed by the BBC and anyone else who has written or intends to write about these events. In an era of fake news, public service broadcasting and a free press have never been more important. These failings, identified by investigative journalists, not only let my mother down, and my family down; they let the public down too.”

Prince Harry also responded to the inquiry saying, “Our mother was an incredible woman who dedicated her life to service. She was resilient, brave, and unquestionably honest. The ripple effect of a culture of exploitation and unethical practices ultimately took her life. To those who have taken some form of accountability, thank you for owning it. That is the first step towards justice and truth. Yet what deeply concerns me is that practices like these—and even worse—are still widespread today. Then, and now, it’s bigger than one outlet, one network, or one publication. Our mother lost her life because of this, and nothing has changed. By protecting her legacy, we protect everyone and uphold the dignity with which she lived her life. Let’s remember who she was and what she stood for.”