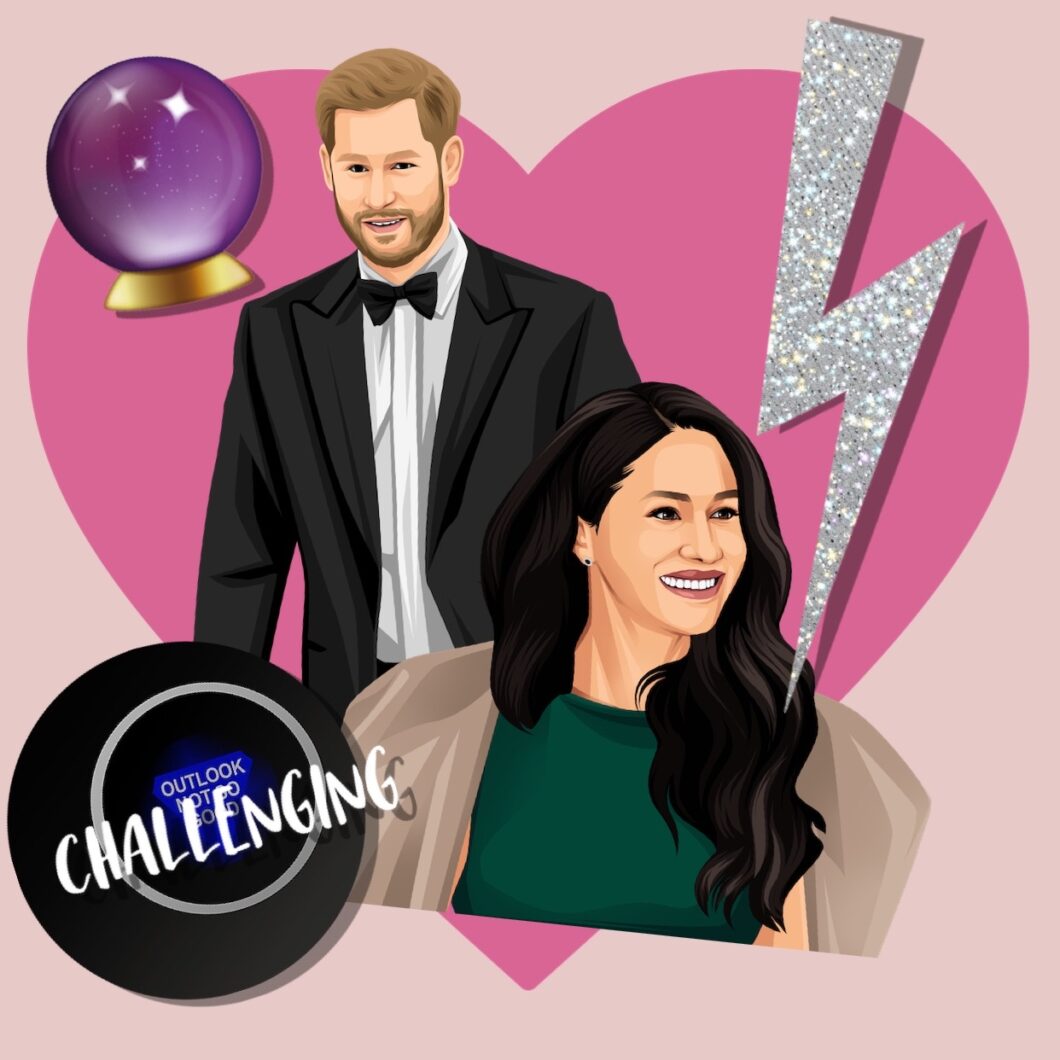 Celebrity astrologer Emile Adame exclusively tells the To Di For Daily podcast that according to Prince Harry and Meghan Markle‘s zodiac signs, the California couple are currently “at odds” with each other.

Discussing the Duke and Duchess of Sussex, Emili explains, “I do see a lot of problems in the relationship behind closed doors. And currently, right now they’re at odds.” She continues, “I see her (Meghan) having a lot of heartache right now. And I feel that he wants to be back home. And she does not, she doesn’t want to be a part of that.”

Emili says that Meghan feels out of place in the royal fold and is using her time away from the limelight to figure out who she truly is.

Here is a transcript of the above video –

Emile Adame: Before, when I’ve looked at them, I had felt that the relationship could end. But I think too… a lot of the energy that I was seeing was I was seeing all the trouble that was coming right after the wedding. What I still see is more chaos. This is a very challenging marriage, very challenging. Here’s what I feel… I can see two roads. And one of the roads that I see is that the relationship itself… that they could grow apart at some point emotionally, but that Harry would feel a duty to his children, and would not leave them. But I do see a lot of problems in the relationship behind closed doors. And currently, right now they’re at odds. I see her having a lot of heartache right now. And I feel that he wants to be back home. And she does not, she doesn’t want to be a part of that. She has other plans. I think I mentioned to you previously, maybe months ago… that I had felt that he would wake up one day, and he would say, ‘Wait a minute… you know… what decisions have I made here?’ because he can have an energy of kind of careless spontaneity. And it’s kind of catching up with him. And I feel that he’s realizing that it’s important to mend the relationship with his brother and with the family and to still be an active participant. But I feel that this is painful for her, she does not feel seen or heard or doesn’t feel that she belongs when it comes to the family. And so she feels very much like an outsider. And I do see some energy coming up. Like I would say, April through June, she may have some issues in the headlines. I just see some trouble coming up, I see a consistent pattern with them, where they’re just going to be tossed throughout the press. But with Harry, there’s just a lot of tension around what decisions are to be made, I feel that his heart right now lies at a distance. And she’s… they’re just at odds right now. I don’t see them splitting up right now. In fact, I see that there could be a third child in the future if they choose it. But this is not an easy marriage. At all! I actually feel that she’s really struggling. She’s struggling with some heartache. I see continued turbulence. Outside of them. I see continued turbulence, like ups and downs within the relationship. So –

Kinsey Schofield: So, it’s not an easy road ahead. But it’s a successful road ahead?

EA: It’s a successful road… but the road is not easy. I would say because I look at marriages and relationships and just life paths in general, even though she has the prestige and the money and the power that she has at this point… this is a very challenging life path.

KS: I think that that’s fascinating. And what I also think is fascinating is… I know she’s having these conversations too because she believes in astrology, you know, she went to an astrologer shortly before she met Prince Harry and said, ‘What is your advice for me?’ because she’s been kind of obsessed with love. And she really wanted to find somebody after Trevor and the astrologer said, ‘I think you’ll meet somebody in the UK.’ He didn’t know it was a prince, but he said, ‘I think you’ll meet somebody in the UK.’ So, we know that Megan is also as interested in this… maybe not as much as Princess Diana but she certainly believes in it!

EA: She’s got Scorpio in the fifth house. So… it’s a couple of things: The fifth house is creativity, it’s children, it’s also true love romance and dating. And Scorpio is a very intense sign. It’s a water sign. It’s the most sensitive sign in the zodiac, but it’s black or white. You know, it’s intense passion. So when it comes to her creative projects… she is going to go in with such an intensity and such a passion that it’s going to create transformation. Same thing with the relationship. She was never going to go into this… you know, and just, sit on the fence. She went all-in into the relationship. She is a bit intense. She likes to merge very quickly and she’s very loyal. And she’s got seventh house Capricorn. This is a pretty good position for marriage for the long term. But again, two people can grow apart emotionally.

Listen to the To Di For Daily podcast wherever you find your favorite podcasts – and YouTube!