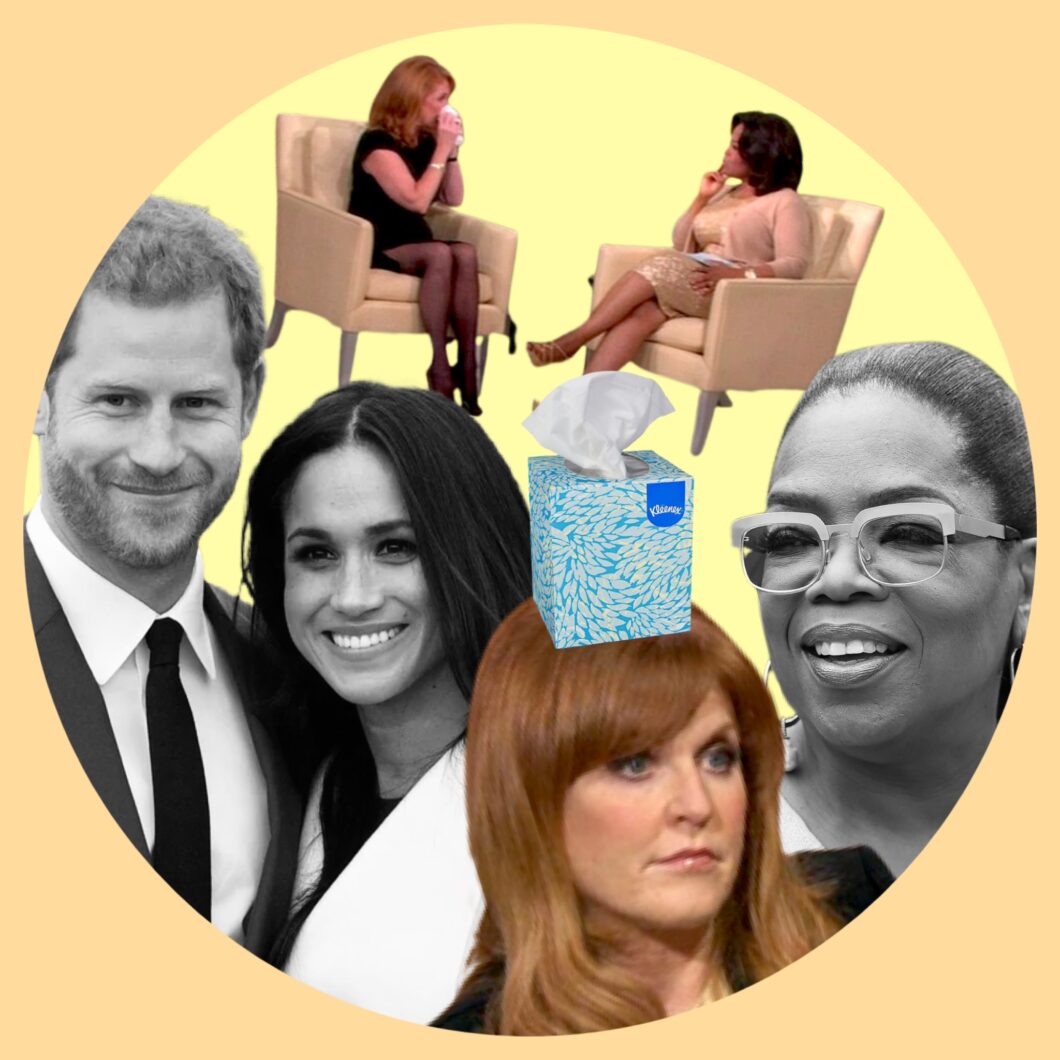 Grab a box of tissues! CBS announced that they will air a special 90-minute interview between Meghan Markle, Prince Harry, and Oprah Winfrey. OPRAH WITH MEGHAN AND HARRY: A CBS PRIMETIME SPECIAL will air on Sunday, March 7th.

The CBS press release says that Meghan will discuss, “everything from stepping into life as a royal, marriage, motherhood, philanthropic work” and public pressure. Then Prince Harry will jump in to discuss life in America.

Oprah attended the Duke and Duchess’ wedding in 2018 and allegedly helped with their strategy and transition from the UK to the USA in 2020. Little is truly known about the depth of their friendship but Prince Harry was working on producing a documentary about mental health with Winfrey for Apple+ in 2019. As of 2021, that project is currently “stalled.”

According to A Royal Duty by Paul Burrell, Princess Diana had quietly met with the talk show host for lunch at Kensington Palace in the ’90s. Fun Fact: Years later Diana’s chef admitted to serving Diana a low-fat plate while serving Oprah a regular plate.

“They were both eating tomato mousses and, after a few mouthfuls, Oprah, another famous dieter, put down her spoon and said, ‘Diana, how do you stay so slim eating rich food like this?’ The princess replied, ‘I just eat small portions and work out,'” claims chef Darren McGrady.

“Diana had me serve her a fat-free version of the mousse, while Oprah was eating the full-fat dish chock full of mayonnaise, sour cream, and heavy cream,” he claims. “Diana never did tell her the truth,” says the royal chef.

Oprah never scored her Princess Diana interview… but she did find a friend in Sarah Ferguson, Duchess of York. Oprah seems to give Fergie a sympathetic ear every time she finds herself in hot water.

In 1996, Fergie discussed the reality vs. fairy tale of marrying into the royal family. Sarah married a Prince too… but everything went downhill when Prince Andrew had to go back to work and Fergie was expected to stay at Buckingham Palace. Alone. She describes the experience as dark (literally) and lonely.

Fun revelation: Fergie got to keep her diamond tiara.

Princess Diana was still alive when this interview took place. They discuss her at 3:45. Oprah says that the paparazzi “have tried to kill Diana.” Chilling.

Around 5:00 Oprah asked Fergie a question that I anticipate she will ask Meghan Markle too… “Why don’t you just behave yourself? Do what you’re told. Keep the 30-watt bulbs. You know what I’m saying? And just play the game… and go along with the program?” To which Fergie replies, “You could do that. And if that’s what suits you, that’s what suits you. But I’m afraid for Diana and I, we learn, we are like rivers. We want to learn more. We want to go around the next corner. We’re hungry for life. We’re very curious. I speak for myself here. Not for her because she’s not here.”

I expect Markle’s answer would be something similar to her ITV confession… “It’s not enough to just survive something… you’ve got to thrive.”

Then Oprah makes a pretty damning observation very relevant to her upcoming Markle sit-down. She tells Fergie, “To do this. To have this life… means you ultimately lose yourself, whatever yourself is.”

In 1999, Fergie and Oprah attempt to make scones on television.

In 2010 Oprah gives Sarah a very non-confrontational platform to try to explain away explosive video where the Duchess accepts a bribe of $40,000 for arranging “access” to her ex-husband Prince Andrew.

Despite Winfrey’s softballs, the Duchess is clearly in distress throughout certain parts of the interview. This is not Fergie at her best and her stuttering and stammering around a totally unethical ordeal is likely something she would like to forget.

In 2011 Oprah produced a documentary about Sarah Ferguson, Duchess of York as Sarah attempted to resuscitate her brand.

OWN loves these “pulls up in car” shots with celebrities but I sense that we won’t get one with Prince Harry and Meghan Markle. That seems slightly beneath them. Watch how Oprah tells Fergie that Santa Barbara is the best place on earth but she’s not telling anybody… we think the Sussexes got the memo.

Separately in 2011, Fergie told Oprah how much it hurt her to be excluded from Prince William and Kate Middleton‘s wedding. The Duchess of York was invited to Prince Harry and Meghan Markle’s wedding in 2018.

So, what will be the tone of the Meghan Markle and Oprah interview? I see the headlines that “palace officials” are “shaking in their boots” and reporters describing this sit-down as a “no-holds-barred” interview so “everybody better fasten their seat belts” – but I disagree.

I think there has been a huge amount of healing in 2020 for Prince Harry and Meghan Markle. I think these two aren’t vindictive and I believe that when they are hurt, they simply move on.

Do I think it will be a 90-minute infomercial for the Duke and Duchess of Sussex? 100%. But don’t expect them to try to take down and hurt other people to create opportunities for themselves. Not only is that not in their DNA, they simply don’t need to.

HOWEVER, Oprah might use the opportunity to regulate on the tabloids or Thomas and Samantha Markle… but don’t expect anyone to insult the Queen of England. We’ll discuss in full after the interview.

See you back here March 7th for reaction!