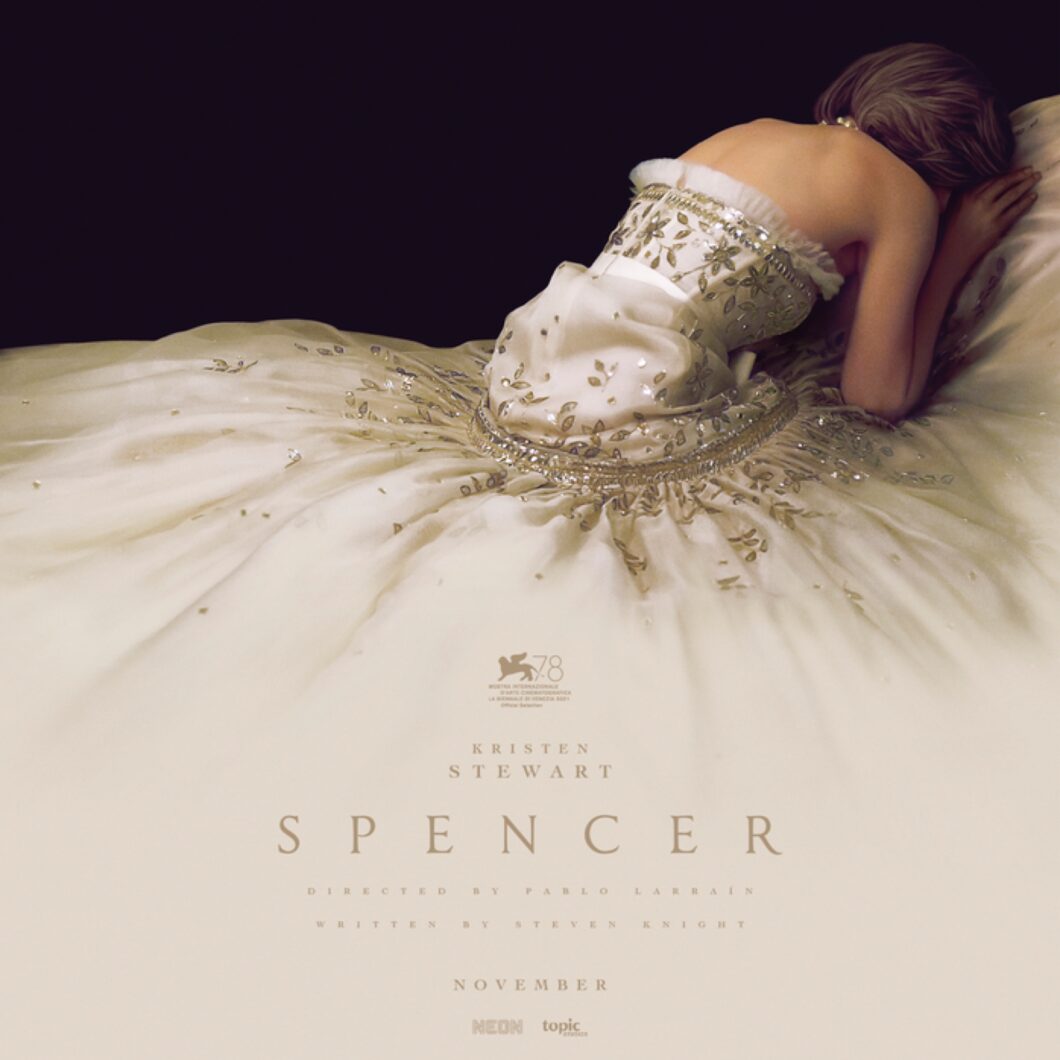 Have you noticed our Spencer movie countdown that we added to the bottom of ToDiForDaily.com? Does that not just scream enthusiasm? Obviously, the universe was listening because when we woke up this morning, NEON posted our first glimpse of the Spencer movie poster with a devastated yet romantic-looking Kristen Stewart draped across the bottom as Princess Diana.

The caption read, “Every fairy tale ends.” I just got goosebumps.

Spencer is set to be released in theaters on November 5th and is based on Prince Charles and Princess Diana’s last Christmas together. The movie description reads, “The marriage of Princess Diana and Prince Charles has long since grown cold. Though rumors of affairs and a divorce abound, peace is ordained for the Christmas festivities at the Queen’s Sandringham Estate.” We have pictures of the actual Christmas holiday here…

“There’s eating and drinking, shooting and hunting. Diana knows the game. But this year, things will be profoundly different. Spencer is an imagining of what might have happened during those few fateful days.” I can’t find the mind-blown emoji so just imagine it HERE!!!

Here’s everything we know about Spencer… the film is the brainchild of director Pablo Larraín and was written by Peaky Blinders creator Steven Knight. Both have shown a sincere interest and adoration for Princess Diana. “Working on the script has been a pleasure. I think it’s a different perspective on a story that we don’t all know well, but we all feel we now are a part of it,” Knight told Variety. “I just found the whole thing fascinating. To talk to people who knew her [Princess Diana] and to try and get a view of this person… who this person really was… who was an ordinary person in extraordinary situations is the way I think of her.”

While Knight and Larraín are both Diana enthusiasts, no one is more excited than Kristen Stewart! “I haven’t been this excited about playing a part, by the way, in so long,” says Stewart. “Spencer is a dive inside an emotional imagining of who Diana was at a pivotal turning point in her life,” she explains. “It is a physical assertion of the sum of her parts, which starts with her given name: Spencer. It is a harrowing effort for her to return to herself, as Diana strives to hold onto what the name Spencer means to her.” Yes, because let’s not forget, Diana was not “a commoner.” She did not need the royal title to maintain her lifestyle or her legacy. She came from a very significant and relevant family… which is why Prince Charles’ family encouraged the coupling in the first place.

Of Diana, Kristen recently told InStyle, “I think there is sort of an unbridled, open, and intimate exchange that she had with the public that was so striking for people that were used to a sort of different face to the royal family. That’s not something I grew up with. I always thought this person was stolen from us and I always had a curiosity about her. Every day that I unfold this story the more emotionally invested I get.” The Twilight star admits, “I remember imagery from the funeral as a really little kid. I remember being really viscerally affected by that.”

The actress was also anxious about nailing Princess Diana’s delicate tone, “The accent is intimidating as all hell because people know that voice, and it’s so, so distinct and particular.”

PS. Kristen is a huge fan of The Crown. “I feel really lucky to have The Crown because I’ve emotionally invested in people that to me feel… like, I know that they’re real people, and there’s ample material to reinforce that and sort of remind yourself of that… but now I feel this emotional attachment to these characters and I have this accompaniment that I can go to sleep with and feel like, ‘Oh, God, I already have feelings about these people,’” she told TheWrap. “That speaks to the show’s credit.”

Yet, Amy Manson, Spencer‘s Anne Boleyn, stresses that Spencer is nothing like The Crown. “It is amazing. It’s definitely nothing like we’ve seen before, it’s nothing like The Crown,” Mason told Good Housekeeping. “It really delves into Princess Diana’s mental state around a certain time in her life. It’s just really unnerving, how great Kristen is. She’s brilliant.”

We have an entire deep dive on why Anne Boleyn might be included in a movie about Princess Diana HERE.

I checked their IMDB pages but their roles have not been disclosed. Sally Hawkins is seen embracing Stewart in the newly released trailer. Is she a lady-in-waiting or court lady?

Olga Hellsing is set to play Sarah Ferguson, Duchess of York. Spencer is currently her only IMDB credit and I doubt that the role is a significant one, however, legend has it that Princess Diana and the Duchess of York had schemed to leave their husbands at the same time but Diana chickened out. Both of their divorces were finalized in 1996. While Fergie was a huge force in Princess Diana’s royal life, she’s been rather excluded from tv and movie adaptions of Diana’s story.