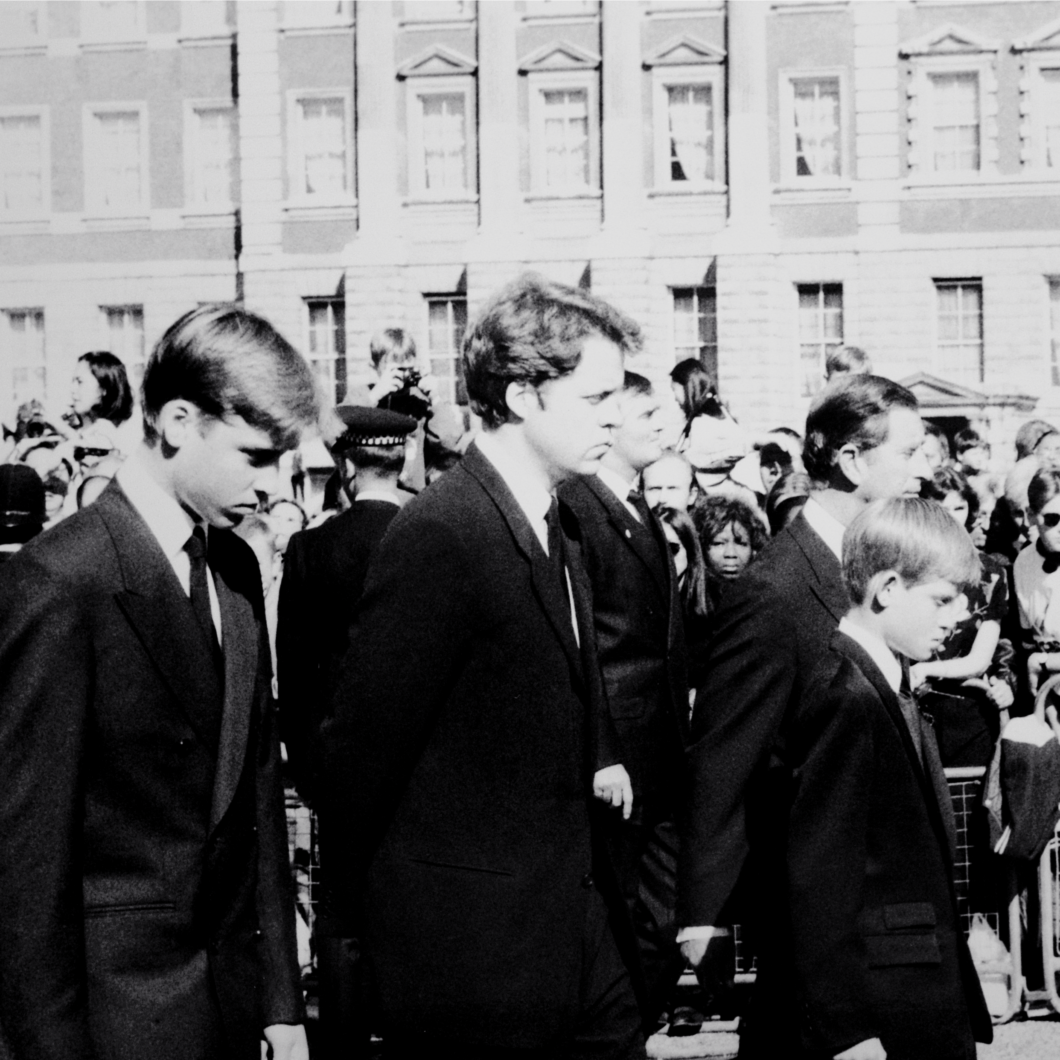 Today is the 23rd anniversary of Princess Diana’s funeral. Where were you?

My Mom took my little brother and I to meet up with one of her female co-workers. It had to have been midnight or some crazy hour. We were definitely out past our bedtime. My Mom’s co-worker’s fiancé managed an extended stay hotel. They had a large community room with giant sofas attached to a kitchen area. It was new. The irony that both women worked for a weight loss company and we ate an entire batch of warm chocolate chip cookies as we watched the world mourn the death of Diana, Princess of Wales, in morbid curiosity. Whenever I smell chocolate chip cookies, I think of Princess Di. (And I still eat an entire batch of cookies when I’m sad.)

What I understood at the time was that Diana was beautiful, kind, and very very important. She had famous friends. Elton John even loved her.

I recently watched an interview where, Charles, the 9th Earl Spencer, explained that he had a broadcasting background so he was confident upon taking the podium… stumbled on one word… and was hit with how serious and important this tribute was to his sister… so he hyper-focused, out of breath, determined to eloquently complete his dedication. He was magnificent and at times, cutting. You can watch the video below…

I stand before you today, the representative of a family in grief in a country in mourning before a world in shock.

We are all united not only in our desire to pay our respects to Diana but rather in our need to do so.

For such was her extraordinary appeal that the tens of millions of people taking part in this service all over the world via television and radio who never actually met her, feel that they too lost someone close to them in the early hours of Sunday morning. It is a more remarkable tribute to Diana than I can ever hope to offer her today.

Diana was the very essence of compassion, of duty, of style, of beauty. All over the world she was a symbol of selfless humanity. All over the world, a standard bearer for the rights of the truly downtrodden, a very British girl who transcended nationality. Someone with a natural nobility who was classless and who proved in the last year that she needed no royal title to continue to generate her particular brand of magic.

Today is our chance to say thank you for the way you brightened our lives, even though God granted you but half a life. We will all feel cheated always that you were taken from us so young and yet we must learn to be grateful that you came along at all. Only now that you are gone do we truly appreciate what we are now without and we want you to know that life without you is very, very difficult.

We have all despaired at our loss over the past week and only the strength of the message you gave us through your years of giving has afforded us the strength to move forward.

There is a temptation to rush to canonize your memory, there is no need to do so. You stand tall enough as a human being of unique qualities not to need to be seen as a saint. Indeed to sanctify your memory would be to miss out on the very core of your being, your wonderfully mischievous sense of humor with a laugh that bent you double.

Your joy for life transmitted whereever you took your smile and the sparkle in those unforgettable eyes. Your boundless energy which you could barely contain.

But your greatest gift was your intuition and it was a gift you used wisely. This is what underpinned all your other wonderful attributes and if we look to analyze what it was about you that had such a wide appeal we find it in your instinctive feel for what was really important in all our lives.

Without your God-given sensitivity we would be immersed in greater ignorance at the anguish of AIDS and HIV sufferers, the plight of the homeless, the isolation of lepers, the random destruction of landmines.

Diana explained to me once that it was her innermost feelings of suffering that made it possible for her to connect with her constituency of the rejected. And here we come to another truth about her. For all the status, the glamour, the applause, Diana remained throughout a very insecure person at heart, almost childlike in her desire to do good for others so she could release herself from deep feelings of unworthiness of which her eating disorders were merely a symptom.

The world sensed this part of her character and cherished her for her vulnerability while admiring her for her honesty.

The last time I saw Diana was on July 1, her birthday in London, when typically she was not taking time to celebrate her special day with friends but was guest of honor at a special charity fund-raising evening. She sparkled of course, but I would rather cherish the days I spent with her in March when she came to visit me and my children in our home in South Africa. I am proud of the fact apart from when she was on display meeting President Mandela, we managed to contrive to stop the ever-present paparazzi from getting a single picture of her… that meant a lot to her.

These were days I will always treasure. It was as if we had been transported back to our childhood when we spent such an enormous amount of time together… the two youngest in the family.

Fundamentally she had not changed at all from the big sister who mothered me as a baby, fought with me at school and endured those long train journeys between our parents’ homes with me at weekends.

It is a tribute to her level-headedness and strength that despite the most bizarre-like life imaginable after her childhood, she remained intact, true to herself.

There is no doubt that she was looking for a new direction in her life at this time. She talked endlessly of getting away from England, mainly because of the treatment that she received at the hands of the newspapers. I don’t think she ever understood why her genuinely good intentions were sneered at by the media, why there appeared to be a permanent quest on their behalf to bring her down. It is baffling. My own and only explanation is that genuine goodness is threatening to those at the opposite end of the moral spectrum. It is a point to remember that of all the ironies about Diana, perhaps the greatest was this… a girl given the name of the ancient goddess of hunting was, in the end, the most hunted person of the modern age.

She would want us today to pledge ourselves to protecting her beloved boys William and Harry from a similar fate and I do this here Diana on your behalf. We will not allow them to suffer the anguish that used regularly to drive you to tearful despair.

And beyond that, on behalf of your mother and sisters, I pledge that we, your blood family, will do all we can to continue the imaginative and loving way in which you were steering these two exceptional young men so that their souls are not simply immersed by duty and tradition, but can sing openly as you planned.

We fully respect the heritage into which they have both been born and will always respect and encourage them in their royal role. But we, like you, recognize the need for them to experience as many different aspects of life as possible to arm them spiritually and emotionally for the years ahead. I know you would have expected nothing less from us.

William and Harry, we all cared desperately for you today. We are all chewed up with the sadness at the loss of a woman who was not even our mother. How great your suffering is, we cannot even imagine.

I would like to end by thanking God for the small mercies he has shown us at this dreadful time. For taking Diana at her most beautiful and radiant and when she had joy in her private life. Above all we give thanks for the life of a woman I am so proud to be able to call my sister, the unique, the complex, the extraordinary and irreplaceable Diana whose beauty, both internal and external, will never be extinguished from our minds.